As part of the criteria for SELECT membership, Technical Advisers are required to carry out periodic assessments of Members and their work. While scheduling such an assessment with Wullie McMaster of McMaster Electrical, he asked if I wanted to inspect a recently refurbished installation. The only catch? It was six hours from SELECT HQ.

And it was a lighthouse.

Always up for a challenge, we duly discussed the requirements with the Northern Lighthouse Board (NLB) and set a date to travel the 200-plus miles from The Walled Garden to the Mull of Kintyre.

After a morning of reports and IET documentation, I set off at 2pm, chasing the setting sun in the west – a task made more difficult with the closure of the Rest and Be Thankful on the A83.

A diversion via Callander, Crianlarich and Inveraray meant the winter sun had vanished by the time I reached my overnight stop in Campbeltown, 16 miles away from my first-ever lighthouse inspection.

The next morning I meandered south to meet Wullie, who told me that a storm was currently lashing the west side of the famous peninsula – exactly where we were heading.

After driving in convoy towards the lighthouse, Wullie suggested I join him in his car for the last 1.5 miles. Any perceived slight at my driving soon vanished as we inched down the steep and narrow track – suddenly I was glad I’d left the SELECT motor behind.

By now the wind was so strong it was blowing the water up out of the potholes, but through the spray the Mull of Kintyre lighthouse appeared below us, perched on cliffs 240ft above the waves.

Once we stopped, even opening the main gate required a risk assessment before we tried it. As we carefully nudged our way inside, I thought:

‘If it’s like this for us, how was it done with donkeys and carts in 1788, when the lighthouse was built?’

Finally, we opened the heavy doors to the tower and took shelter from the gale, where, for the first time in half an hour, Wullie and I were able to talk without shouting to be heard.

Wullie told me he began working on lighthouses in the late 1980s and after steadily working up from smaller projects, McMaster Electrical have now been involved in lighthouse refurbishments since 2015.

For the Mull of Kintyre project, the installation was done to BS 7671 but NLB specification meant it went way beyond the requirements most of us are aware of, with Wullie and his team living at the lighthouse during the works.

Throw in the little matter of DC requirements, battery charging and storage, emergency lighting and the two keepers’ cottages wired in FP for final circuits to discourage any curious wildlife, and it was clear there was going to be plenty for me to inspect.

Starting with a thorough tour of the impressive 40ft high structure, Wullie explained that working at such remote spots brings its own logistical challenges.

He told me: “Refurbishments are time consuming – it takes around eight weeks to turn around a lighthouse for a full infrastructure upgrade all the way from main panel boards and sub distribution to final circuits. Within that there’s control cabling, back-up DC, battery charging, security alarms and fire detection and alarm – not to mention state-of-the-art LED lights.

“We use a whole breadth of installation practices on each lighthouse. One installation alone requires a huge amount of stainless steel tray work, steelwork armour, AC/DC circuits and so on.

“This has a knock-on effect with the type of drill bits we use and even things like marine grade screws – there’s always lots to think about.

“When it comes to other materials, everything needs to be planned and packed beforehand, from internal and external paint to doors and even concrete if required. And there’s no wholesaler around the corner if we forget something.”

As we continued the assessment, Wullie explained how electrical installation in this type of safety-critical building has come on in leaps and bounds from the early candle-powered days.

But while technology may have transformed some things, the age-old challenge of logistics still remains.

“As you can imagine, the implications for this type of work are massive,” he said. “We usually use helicopters to reach the most remote lighthouses which aren’t accessible by road. If the weather is bad and the helicopters can’t operate, we use a ship which is loaded in Oban and then offloaded at the lighthouse by helicopter once the weather allows it.

“Our guys also live on this ship while they’re working and are flown back and forth to the lighthouse. Because of this, they all undergo emergency training, including procedures for ditching at sea and using the appropriate survival suits in case of such a manoeuvre.”

He added: “For the time they’re on the refurbishment, the guys live for the job. At Mull of Kintyre, they were lucky enough to have the cottages to stay in, but at others they can’t get the van close enough and there’s a half-hour walk to and from the lighthouse – hard going after a 12-hour shift.

“But the guys really enjoy the work – it’s different to anything else and they see some interesting parts of the country that a lot of people will never see.”

But surely there must be some hairy moments too?

Wullie paused for a moment and then smiled. “I remember being on the Bell Rock in the middle of the North Sea when a storm struck,” he said. “The tower was shuddering as the waves pounded it and I was thinking, ‘This could be the end’ but then I realised it had been standing for more than 200 years so it probably wasn’t going to fall down just yet!”

As we looked out across the chilly waters, Wullie reflected on how he’s now worked on remote lighthouses of all sizes around Scotland, from the 40m-high giants down to the smallest here at Mull of Kintyre. Other projects have included the infamous Flannan Isles Lighthouse in the Hebrides, where three keepers vanished in 1900 with their table still set for dinner.

Conspiracy theorists claim everything from aliens to pirates were responsible for their disappearance, but most think they were swept away by a huge wave, possibly while trying to help each other. Their bodies were never found.

Less of a mystery is how being a SELECT Member helps Wullie and his team keep performing this invaluable work around the coastline of Scotland.

“Being a Member of SELECT definitely helps us, as the NLB put their staff through inspection and testing training too,” he said.

“TRAC Engineering, who are the main contractors, wouldn’t accept McMasters unless we were Members of SELECT.”

With our assessment successfully completed and no issues found, NLB’s Retained Lighthouse Keeper (RLK) suddenly arrived to carry out some routine checks of his own and make sure that we were okay. His appearance allowed Wullie to ask a favour – to drive me back up the cliff to civilisation, and my car, while he finished off his work in the lighthouse.

Leaving Wullie to make sure the candles keep burning, the RLK duly escorted me back, with his knowledge of the road proving invaluable. His top tip? “Keep it in second all the way, even on the tightest switchback.”

From there, the trusty satnav said it would be more than five hours to Edinburgh. Timing was everything as my next appointment was a meeting of the Edinburgh Electrical Society at 6:30pm. Thankfully I made it – just in time for my second illuminating engagement of the day. 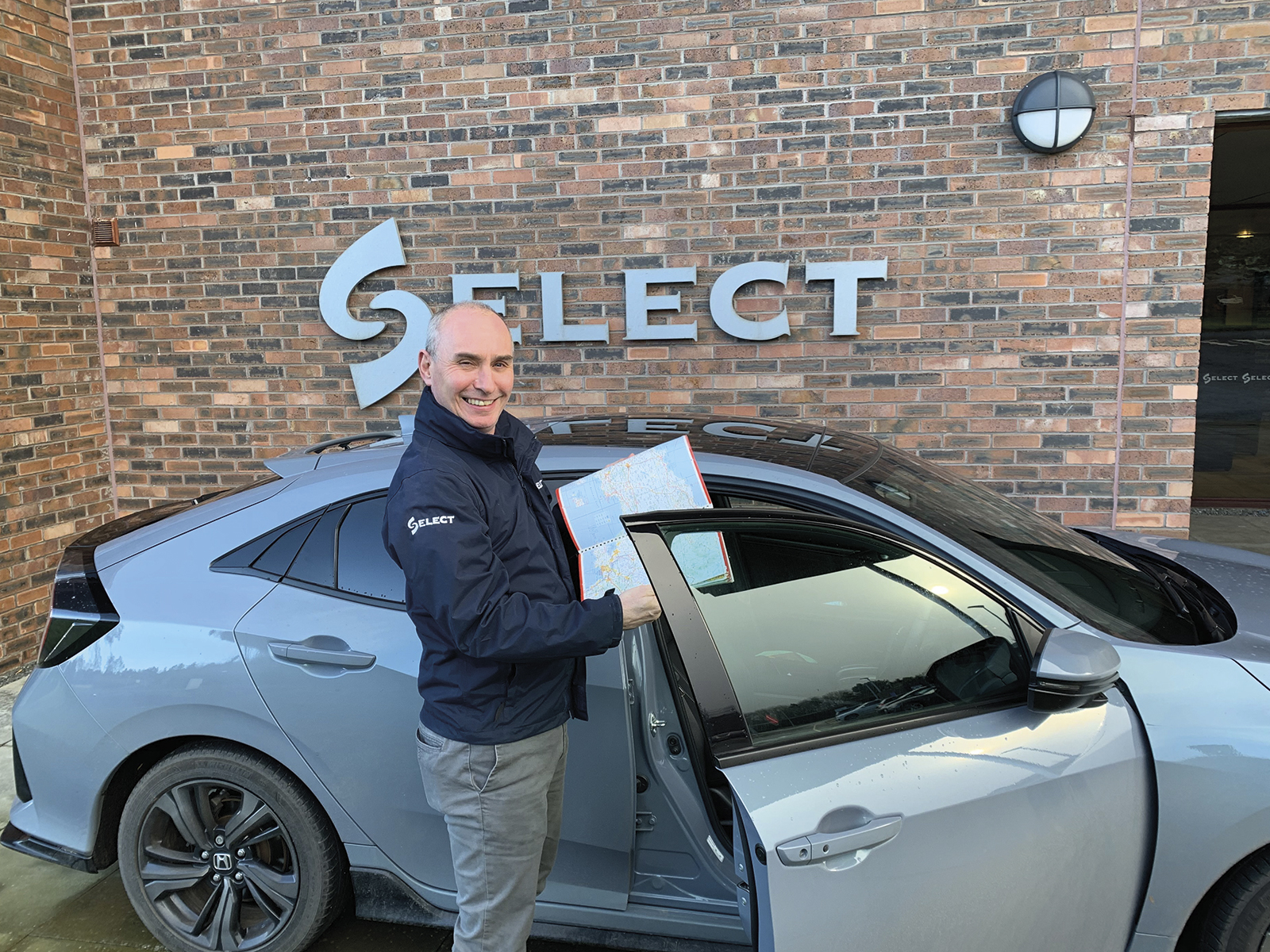 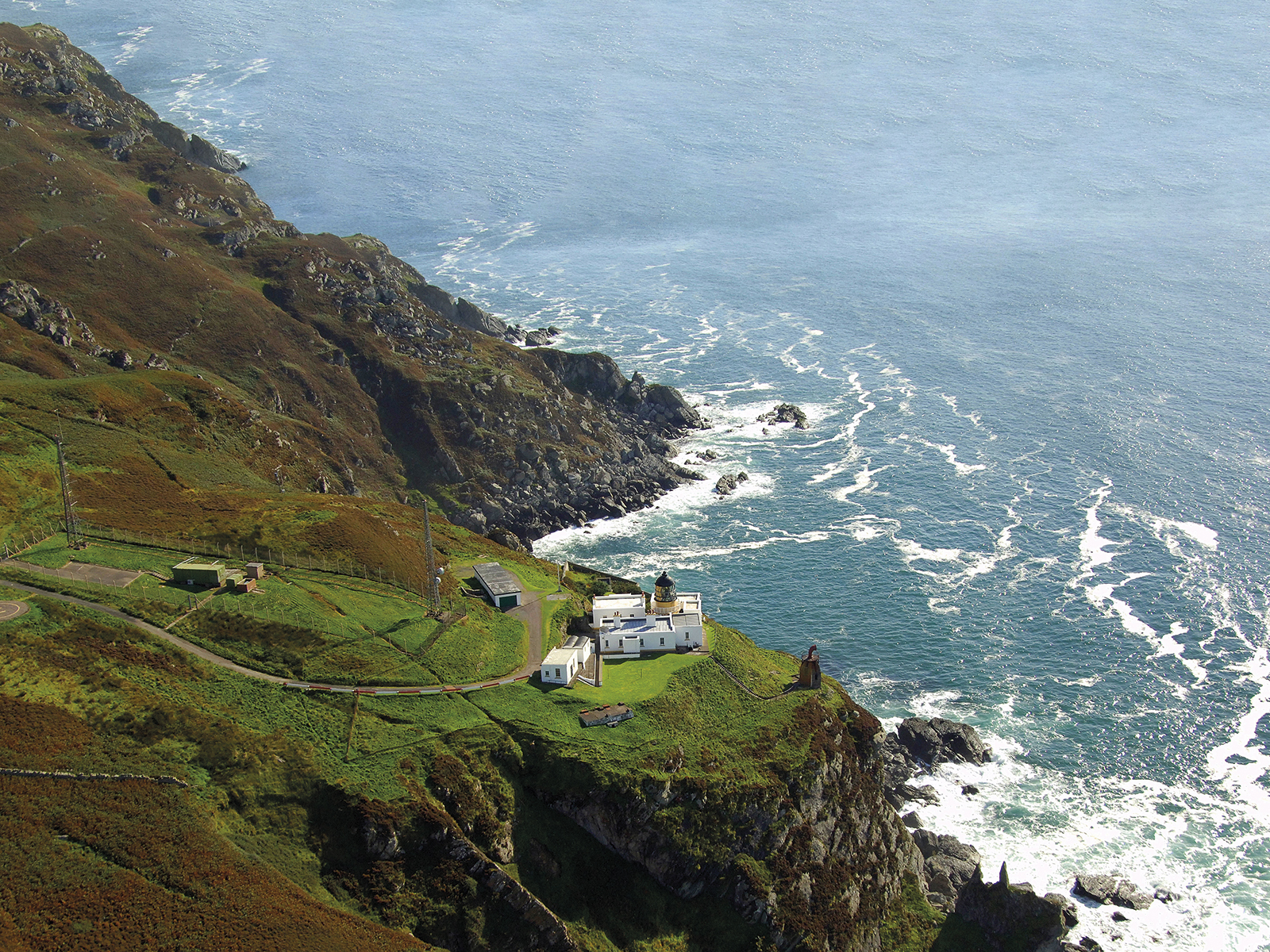 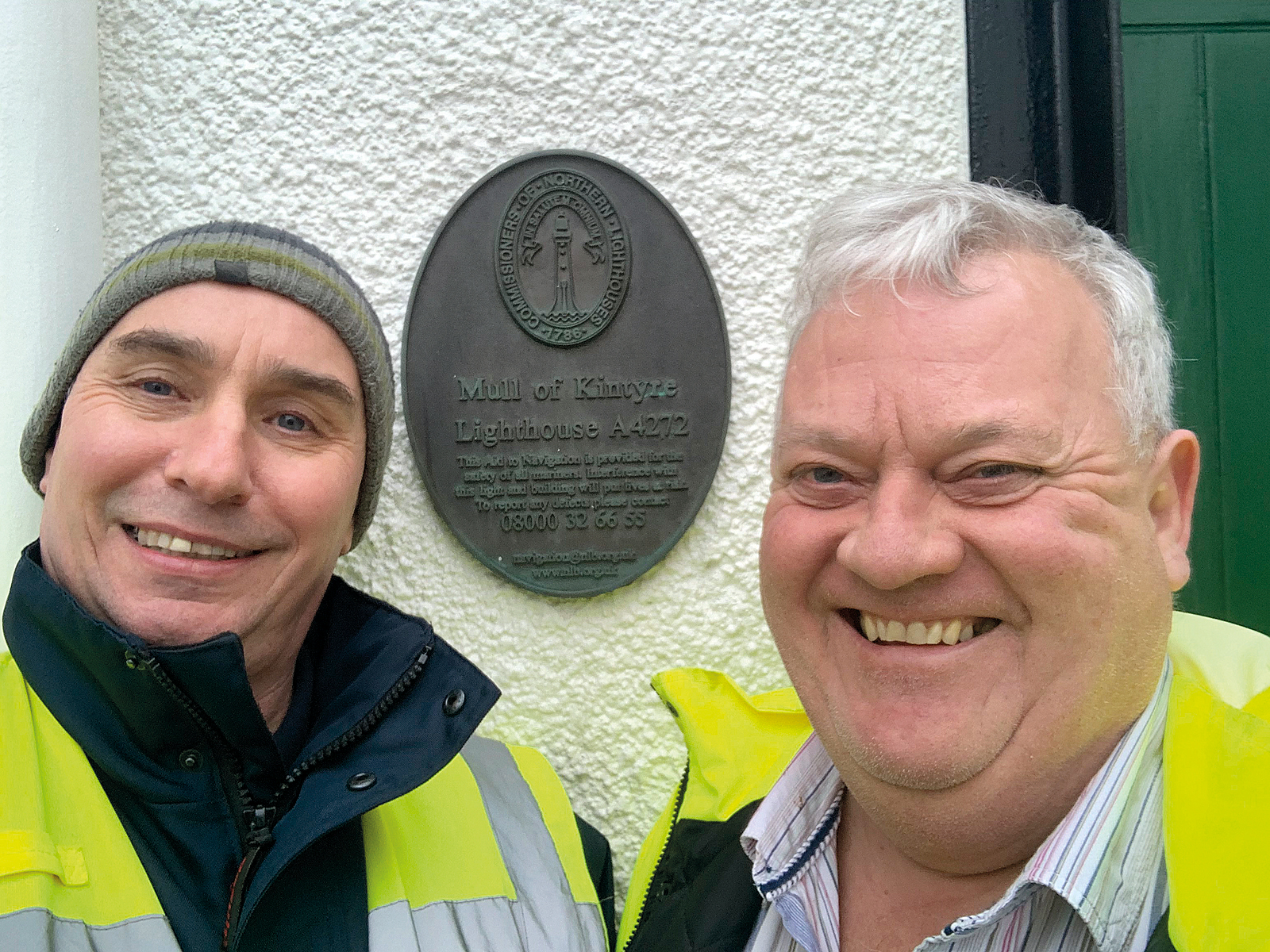 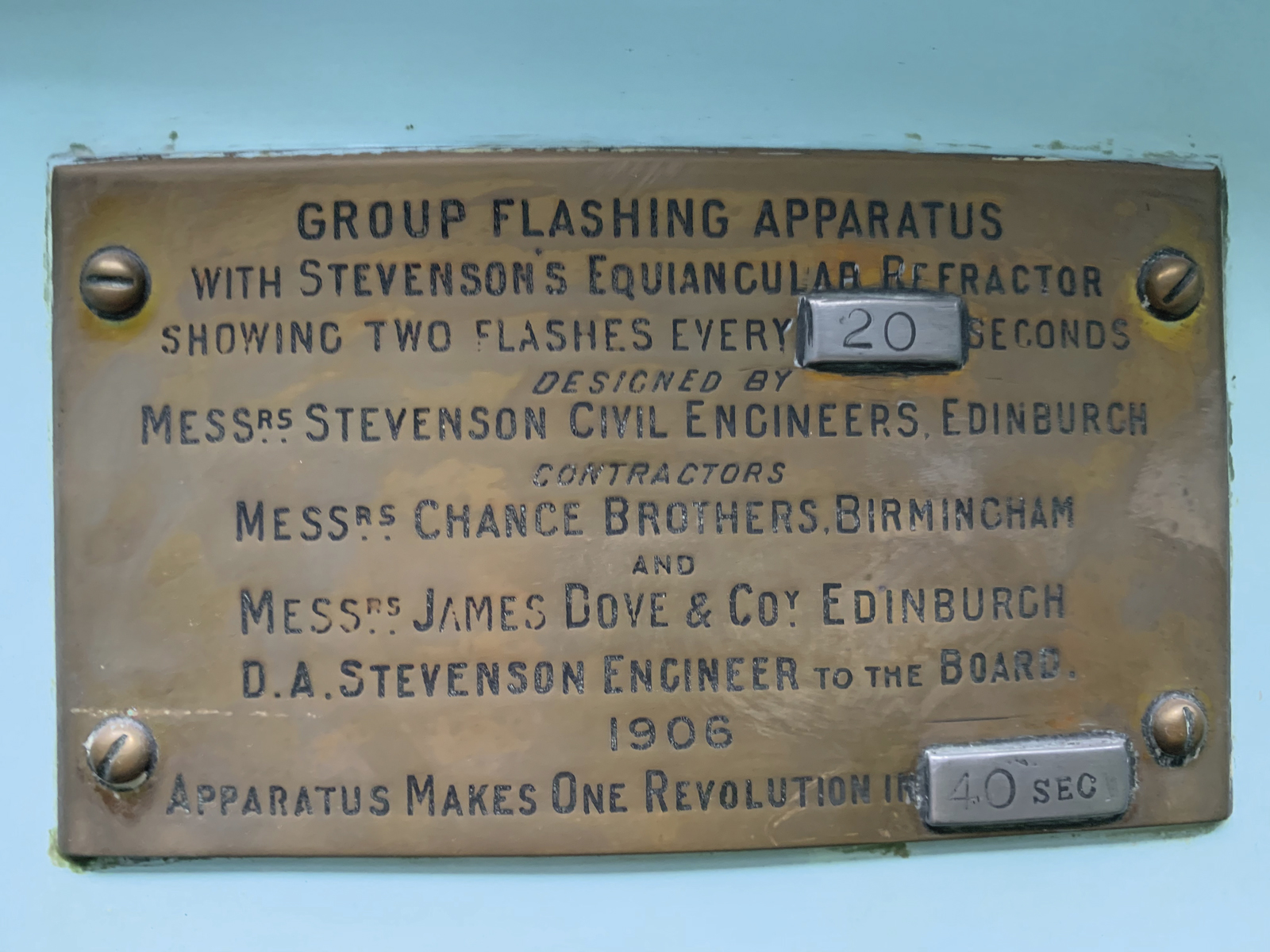 The Mull of Kintyre Lighthouse was built in the 18th century by Thomas Smith.

Construction took 22 months, with the first light beaming across the waves on the night of 1 November 1788.

In his book, The World’s Lighthouses Before 1820, D Alan Stevenson wrote: “This lighthouse was erected 240ft above the sea and inaccessible from it, but the rocky and desolate interior of Cantyre peninsula made the site scarcely more accessible by land.

Materials and stores had to be landed by boat six miles away and taken on horseback over the mountain. A journey from landing-place to lighthouse represented one day’s work.”

In 1976 the light was changed to electric and the candlepower increased to 1,575,000, by using a 3.5kW electric filament lamp light source with catadioptric lens driven by duplicate electric motors.

The lighthouse was automated in 1996, with the light source changed to a 250W multi vapour lamp, allowing full service to be maintained by back-up batteries during any mains failures.

The Northern Lighthouse Board has provided a vital safety service to mariners since 1786.

It is responsible for the superintendence and management of all lights, buoys and beacons within Scottish and Isle of Man waters.

NLB’s service makes a significant contribution to the prevention of accidents and incidents around the coastline, safeguarding not only lives and property, but also protecting our precious marine environment.

NLB currently operates and maintains 206 lighthouses and 170 buoys as well as providing radio aids to navigation (AtoN). It is also responsible for ensuring that other AtoN providers in the area, such as port authorities, conform to international standards.