Cream of the electrical crop are rewarded at SELECT Awards 2018

The unsung heroes who keep the nation switched on had their moment in the spotlight at the SELECT Awards 2018.

Professionals and companies from every part of the country gathered in Glasgow on 12 October to find out who’d won the industry’s most eagerly-anticipated honours.

Addressing over 300 guests, Darrell Matthews, SELECT Managing Director, said: “The entries this year were in tune with the new levels of excitement in the industry, which is entering a transformational period backed by forward-thinking, innovative companies and individuals.”

SELECT President Kevin Griffin then appeared on stage in a baseball cap and shades, quipping: “Who says the electrical industry isn’t cool?”

It was then on to the main event, with the nominees waiting nervously as the envelopes were opened…

Founded in 2007, the firm is widely regarded as representing all that’s best in the industry, combining a strong growth strategy with a can-do attitude.

Darrell said: “M-Pact is an outstanding example of our larger firms who not only create jobs and opportunities but also display a vision and ambition which means that, for them, the sky’s the limit.”

The inaugural winner in this category was Kenneth Ferguson Electrical Contractor, from Connel, near Oban.

Established in 2006, the firm has carved out a substantial business in the local area providing domestic, commercial and industrial services. Darrell said: “Medium sized companies can be significant employers in non-metropolitan areas, and Kenneth Ferguson has built a substantial and growing presence.”

The award was presented by Dylan Mansfield, of award sponsor Whitecroft Lighting. KF Watson, of Aberdeen, Ideal Electrical Solutions, from Edinburgh, and Moray Robertson Electrical Services, of Stirling, were also nominated, with the latter being highly commended.

This category is always hotly contested by many of SELECT’s 1,250 Members – and this year the top honour went to a clearly delighted ATD Electrical Services, of Newton Stewart.

The company has been servicing the retail, commercial, agricultural and industrial needs of the Dumfries and Galloway and Ayrshire areas since 2011 and has prospered by keeping ahead of evolving legislation and technologies.

Alan Wilson said: “Because of the company’s geographical location, every job must be specified clearly to make sure that all materials needed are contained in the van as it’s a long way to travel if something is missing. They really do care about the attention to detail!”

Best Use of Training

This keenly-contested category is at the core of the industry’s skills agenda – so Lotus Electrical Services Ltd were delighted to scoop top spot. It was a fitting award for the forward-thinking firm, which is based in Dumfries and was founded by former apprentice Greg Hutchings in 1997.

Lotus – which won Best Small Contractor award 12 years ago – employs a skilled workforce from a variety of technical backgrounds.

Darrell Matthews said: “Lotus ensures that staff at all levels are given training opportunities to develop. The business has grown hugely and homegrown staff are given a chance to take on new roles, supported by suitable training.”

The trophy was handed over to Greg by Craig Thompson, of award sponsor Ross Electrical (now Rexel). Also nominated for the award were Stensons (Laurencekirk) Ltd, Kenneth Ferguson Electrical Contractor, and Fife Council, from Glenrothes, with the latter highly commended.

Great focus on customer satisfaction received its reward as Invincible Fire and Security triumphed in this hotly-contested category.

The Ardrossan-based company, which was established 20 years ago, provides a personal service to a client list which includes local authorities, housing associations, nursing homes, the NHS and thousands of small businesses and residential customers.

Alan Wilson said: “Invincible has learnt lessons from past issues in customer care and has worked very hard to turn them round so that all existing and new customers now enjoy a first-class service.”

With the integrity of premises an increasing concern, a smart security floodlight system produced by ESP won them this sought-after award.

Combining a Wi-Fi security camera and LED floodlight system, the GuardCam Deco can detect an intruder up to 10m away, light the area, initiate a video recording and provide an option for remote monitoring and two-way communication from a smart device.

Dave Forrester, SELECT’s Head of Technical Services, said: “It was clear ESP had spent time considering how the system could be installed and used easily and safely.”

The trophy was presented by Gerald O’Hare, of sponsor City Electrical Factors. Manrose, of Berkshire, and AICO, of Shropshire, were also nominated, with the latter highly commended.

The Annan-based company – whose impressive client portfolio includes Coca Cola and Young’s Seafoods – delivers specialist expertise in electrical and mechanical engineering. Darrell Matthews said: “Select Electrical & Mechanical Services is an excellent example of how things should be done and has fully utilised technology to safeguard its clients.

“Its use of thermal imaging techniques is vital in ensuring that potential safety defects are dealt with quickly to stop small issues escalating into large safety critical problems.”

It was the latest triumph for the company, which is based in Edinburgh and operates nationally, and last year won Electrical Contractor of the Year and Best Use of Training. Alan Wilson said: “The company has made a great effort to make clients aware of the importance it places on customer service.

“The professionalism of its marketing approach shows clients that they’re the focus of everything the business does.”

The increasing role of women in the electrical industry was demonstrated by this award, which was won by a beaming Stephanie Thomson.

Two of the other three finalists were also female, competing in a category which is sponsored by EDA Apprenticeships Plus.

Stephanie, who works for national super distributor Stearn Electric Co Ltd in Glasgow, said: “I’m delighted to be the Wholesaler Apprentice of the Year. It’s interesting that women were well represented in the category, and I hope my win will encourage others to consider the career opportunities offered by the wholesale sector.”

The award was presented by Alan Dunnet, a member of the EDA board, and John Hendry, MD of EDA Apprenticeships Plus. Also nominated were Michelle Mitchell, of Rexel UK, Kirkcaldy, Megan Wedderburn, from Edmundson Electrical, also in Kirkcaldy, and Shaun Leslie, of Inverurie-based Holland House.

A career spent helping others

An outstanding and highly-regarded figure whose early years were spent in the crucible of British industry was honoured by his peers with the Lifetime Achievement Award.

The award recognised the long, varied and distinguished career of David Smith, who was President of SELECT between 2005 and 2007.

In a lifetime which saw David work in national enterprises such as British Steel before setting up in business for himself, the current Central Board Member always made sure that he could find time for others, particularly in the fields of training and skills.

Accepting his award from Neil MacEachern of sponsors Schneider Electric, David told the assembled guests: “I’ve enjoyed my time with SELECT. I’ve met some wonderful people and realised I’m in a wonderful industry.”

Darrell Matthews said: “David has been a great friend and supporter of this organisation, but he has also played major roles in a number of Scottish and UK enterprises and associations. He has unfailingly carried out his tasks in a professional and diligent manner, while always bearing in mind the important part that employers play in developing the skills of the workforce.”

Alan Wilson, Head of Membership and Communications at SELECT, added: “David has made a huge contribution in almost every SELECT committee and has always been on hand to offer sage advice or encouragement.

“He enjoys a life away from SELECT too, of course, but perhaps it’s no surprise to learn that a great deal of his free time is spent encouraging young people to develop themselves too.”

Blair to the throne

Fife Council reinforced its track record of excellence in training young people when one of its rising stars lifted the Apprentice of the Year award. Blair Hendry, 22, who works out of the Glenrothes depot, beat off competition from hundreds of other young hopefuls who are making their mark in the highly technical sector.

He said: “It’s a great honour at being recognised in this way. My employer, Fife Council, has always been supportive and encouraging in my apprenticeship and I am excited about working in a technologically developing sector which will allow me to put my skills to good use.”

The award follows a previous success for the council, which also saw one of its apprentices win in 2013.

Fiona Harper, The Secretary of the Scottish Joint Industry Board (SJIB) – which sponsored the award along with Edmundson Electrical – said: “Young people are the future of the electrotechnical industry and it’s vital that we make sure we have a healthy pipeline of talent coming through.

“Fife Council has been a keen supporter of our apprenticeship programme and Blair is an inspiring example for ambitious people looking for a career in a great industry.”

Blair was presented with his award by the SJIB’s Jock Simpson and Gary Mason from Edmundson.

The duo also handed over certificates to the other finalists – Stephen Berry, who works with Electrical Solutions Network, of Ayr, and Elyse McBride, from T Clarke Contracting, of Falkirk.

Fiona added: “With the support of their employers, trainers and SECTT, these young people have worked hard to become fully-qualified electricians.

“To have reached this stage, the three finalists have not only exhibited extremely high levels of technical and academic expertise but also energy and enthusiasm, a good approach to team working, good communication skills, broad industry knowledge, strength and resolve and an ability to face and overcome challenges.”

The evening in pictures 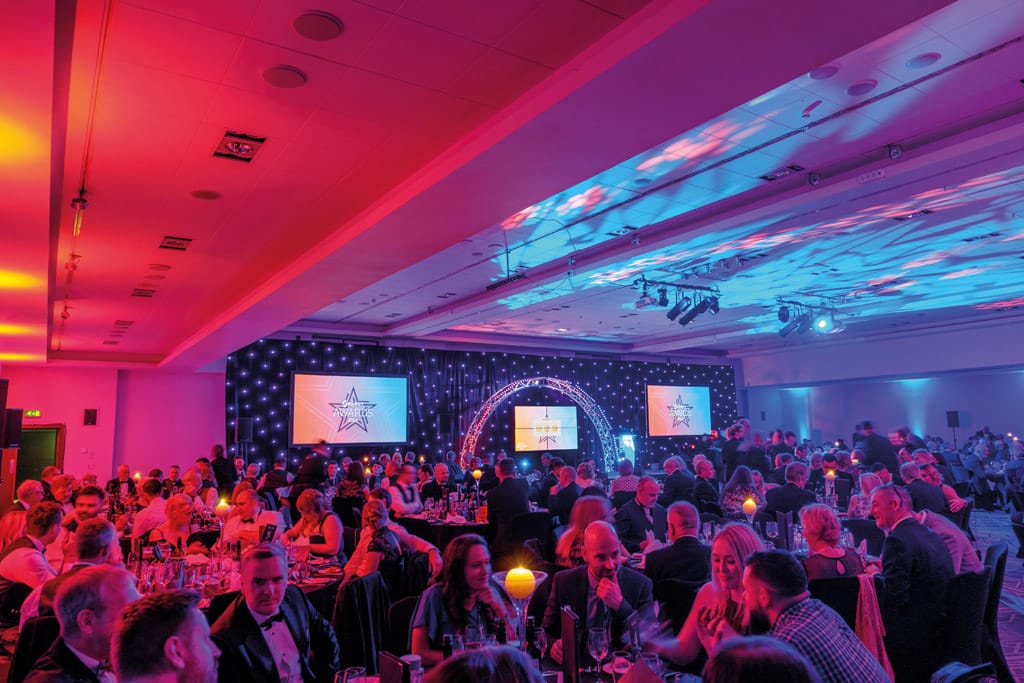 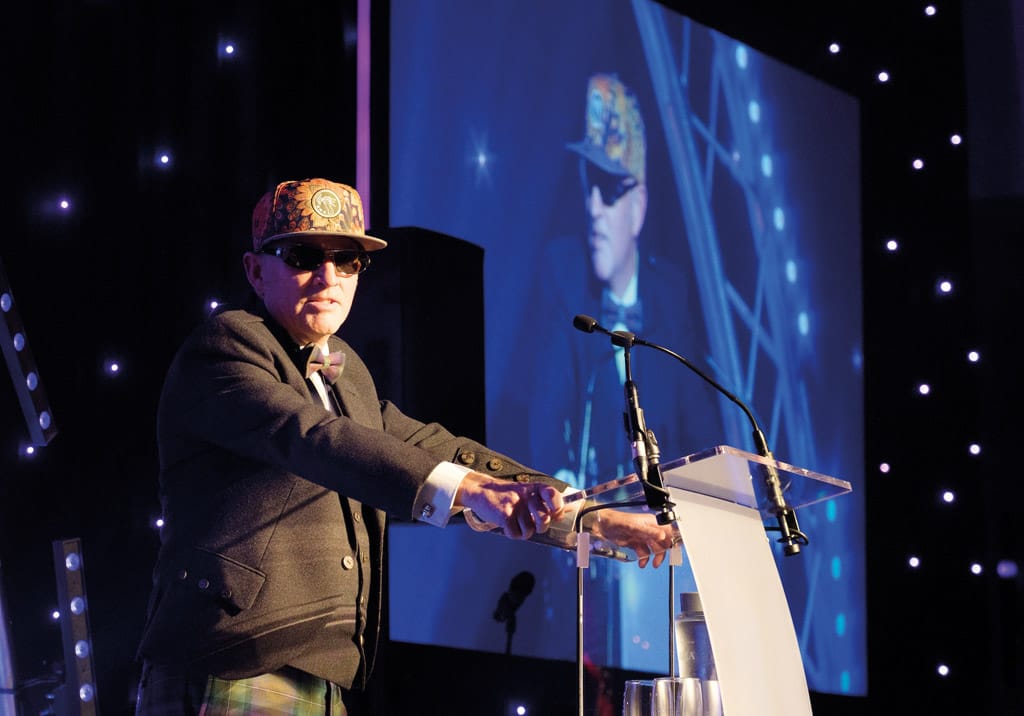 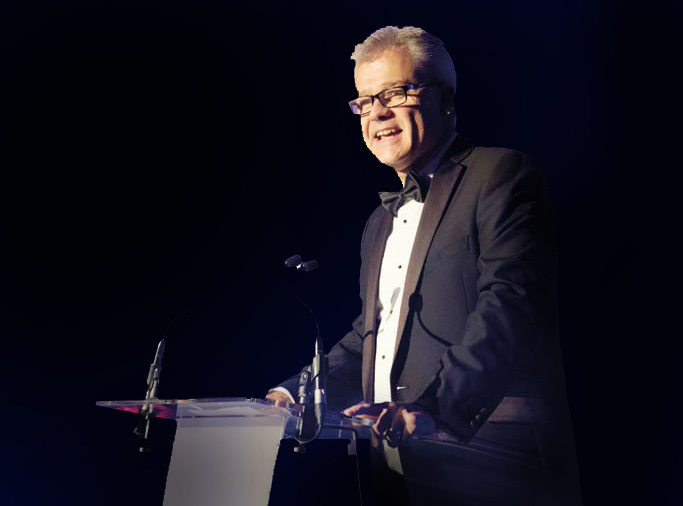 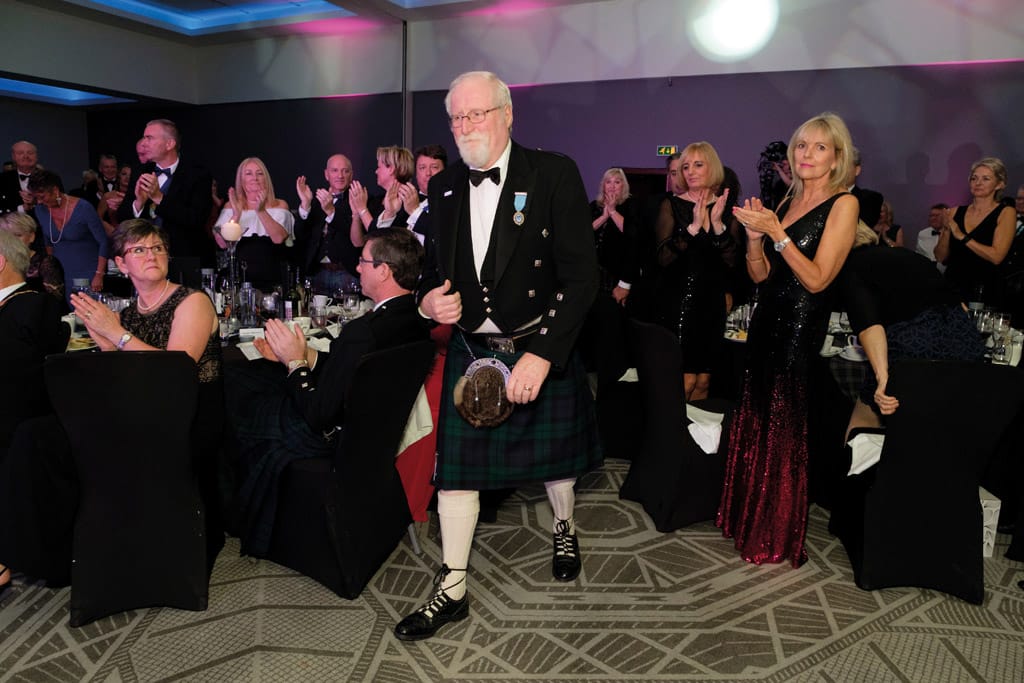 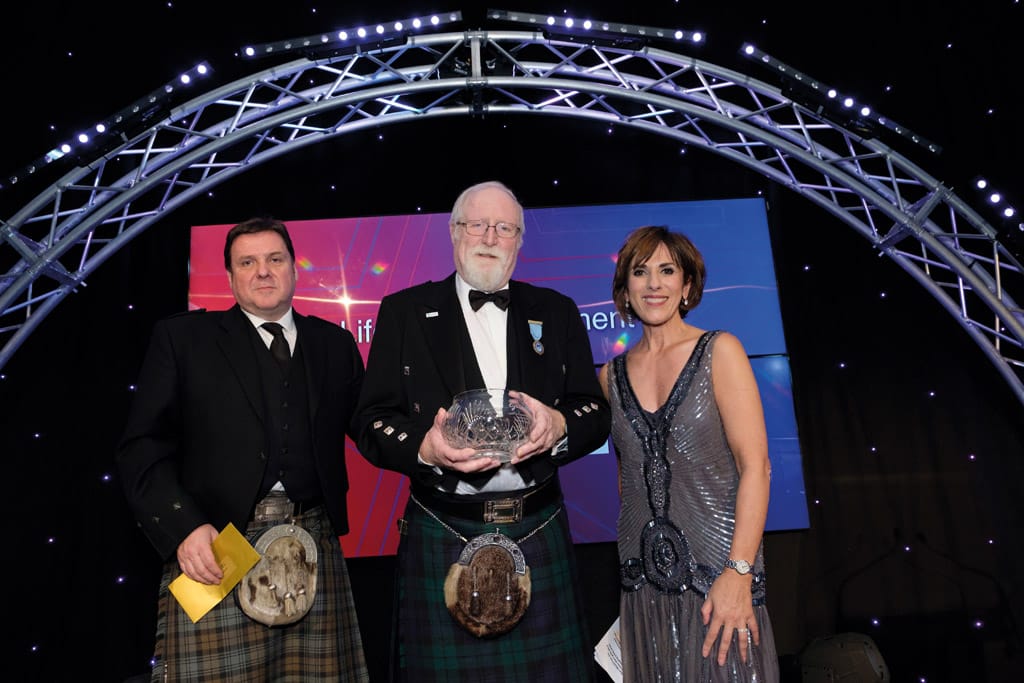 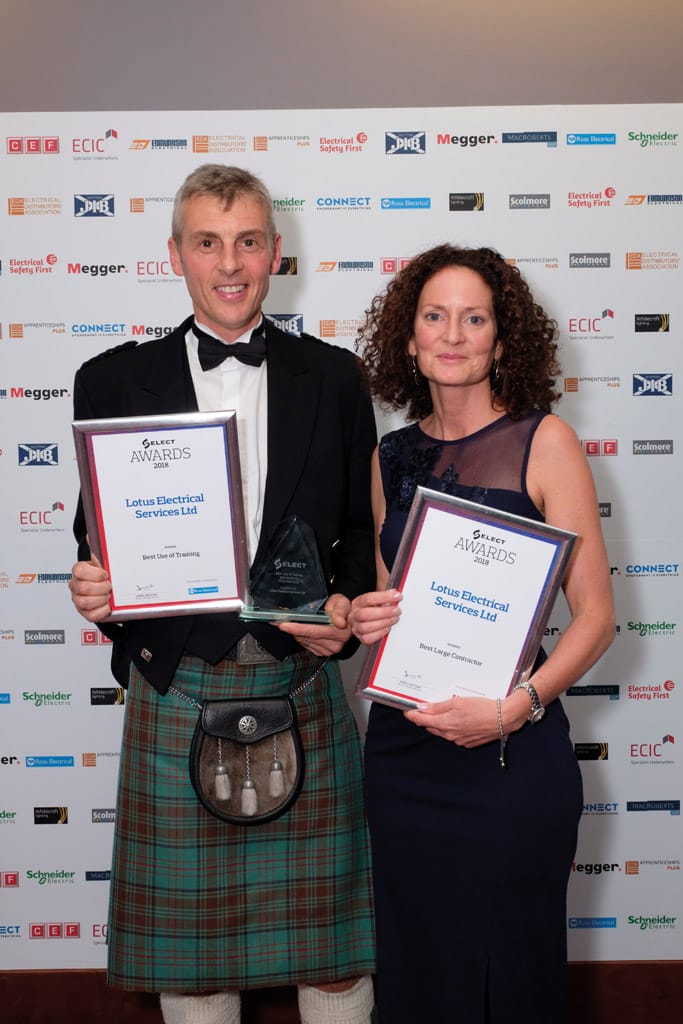 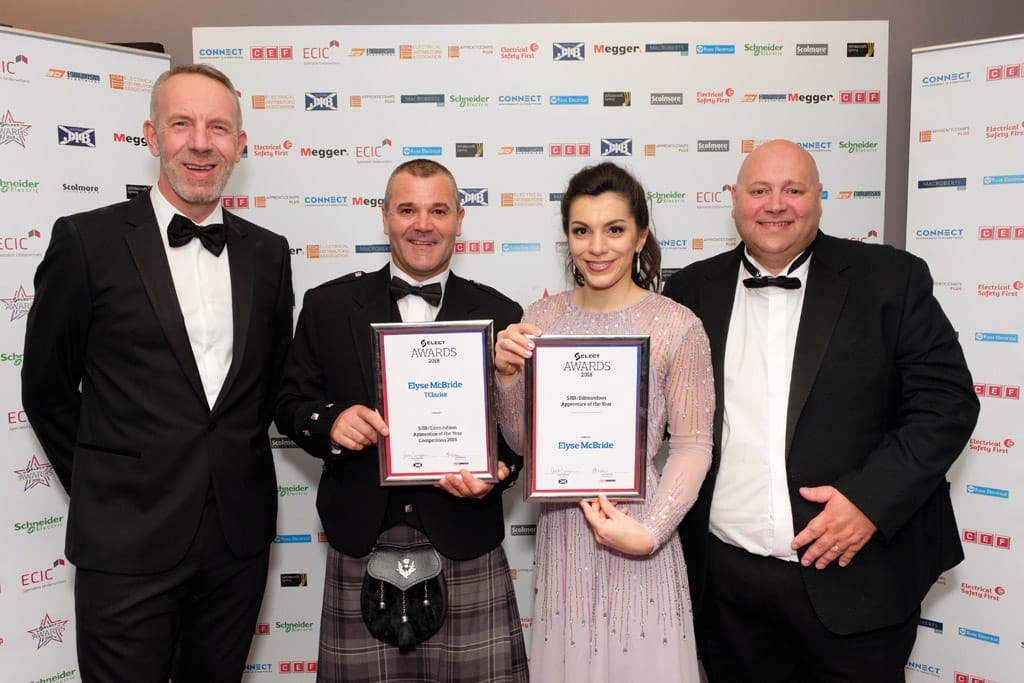 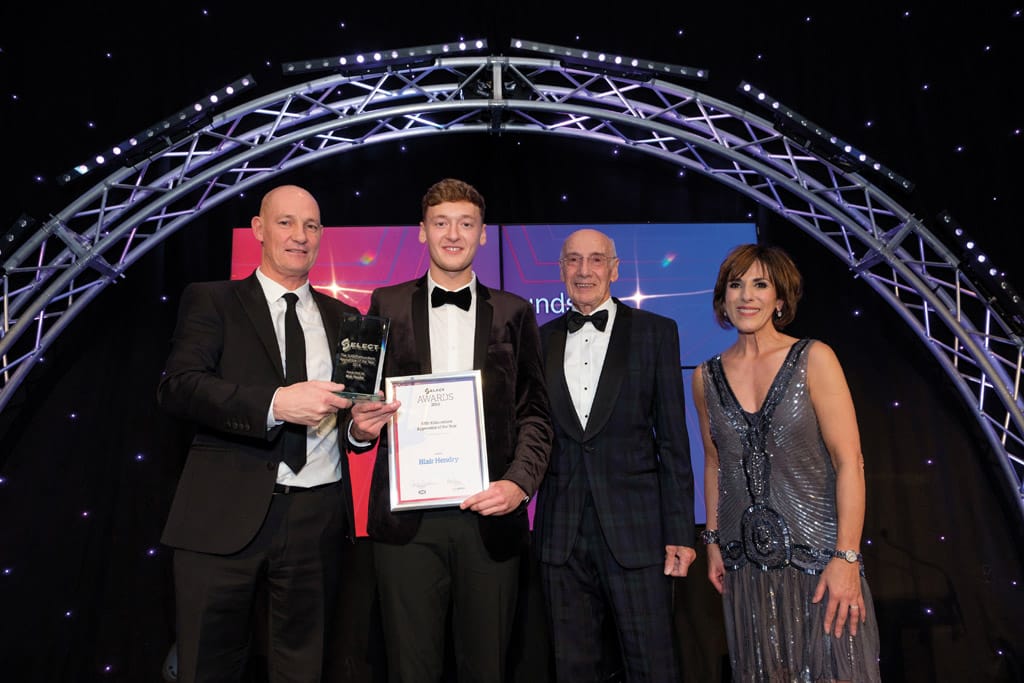 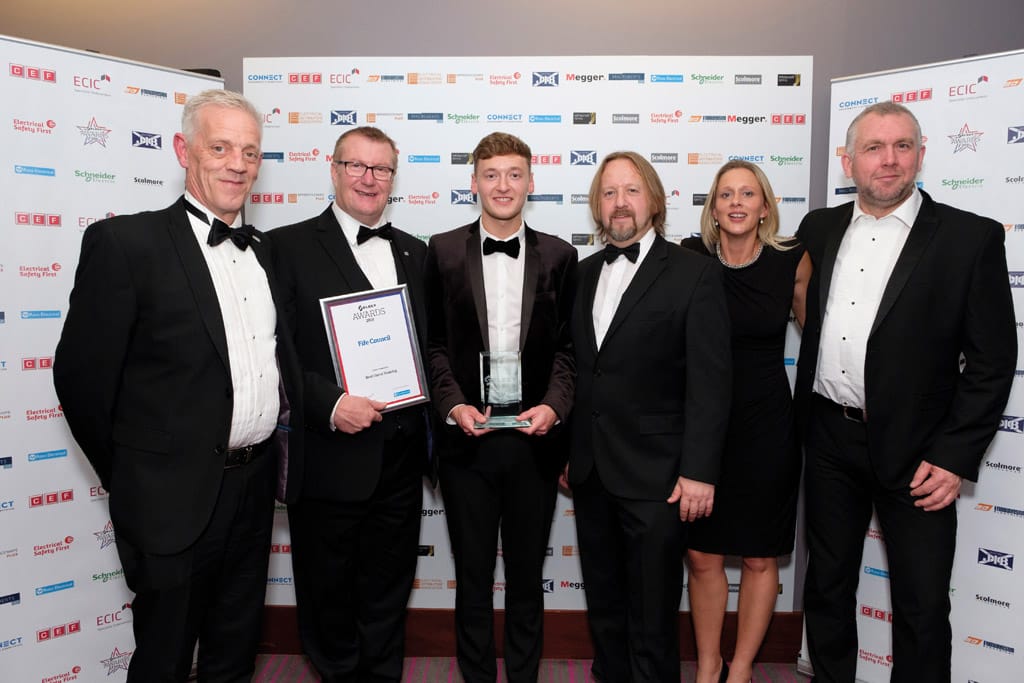 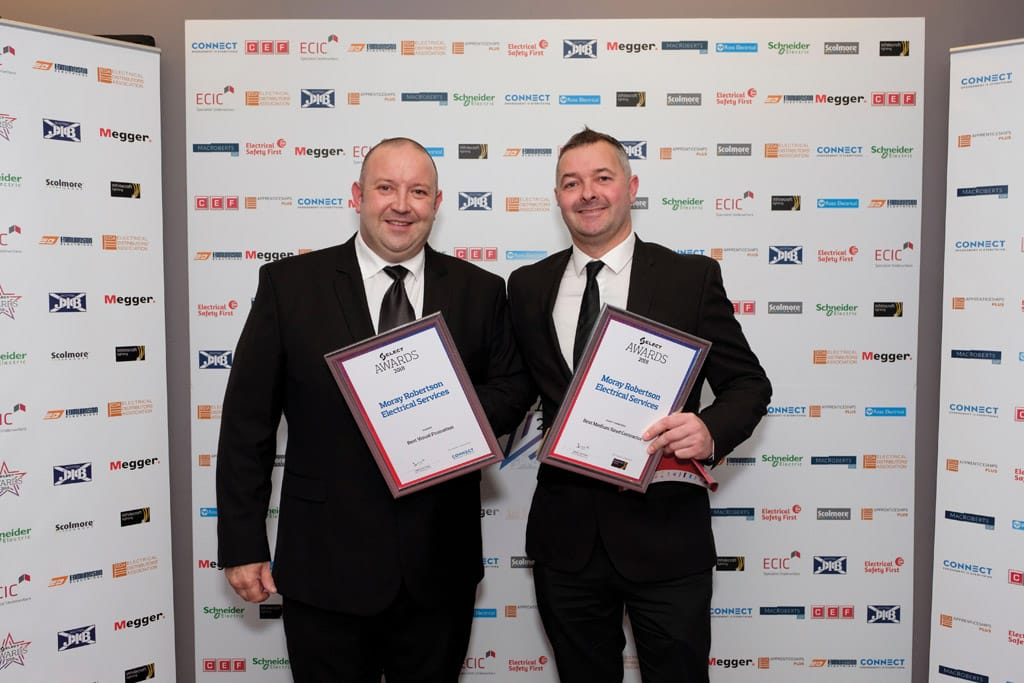 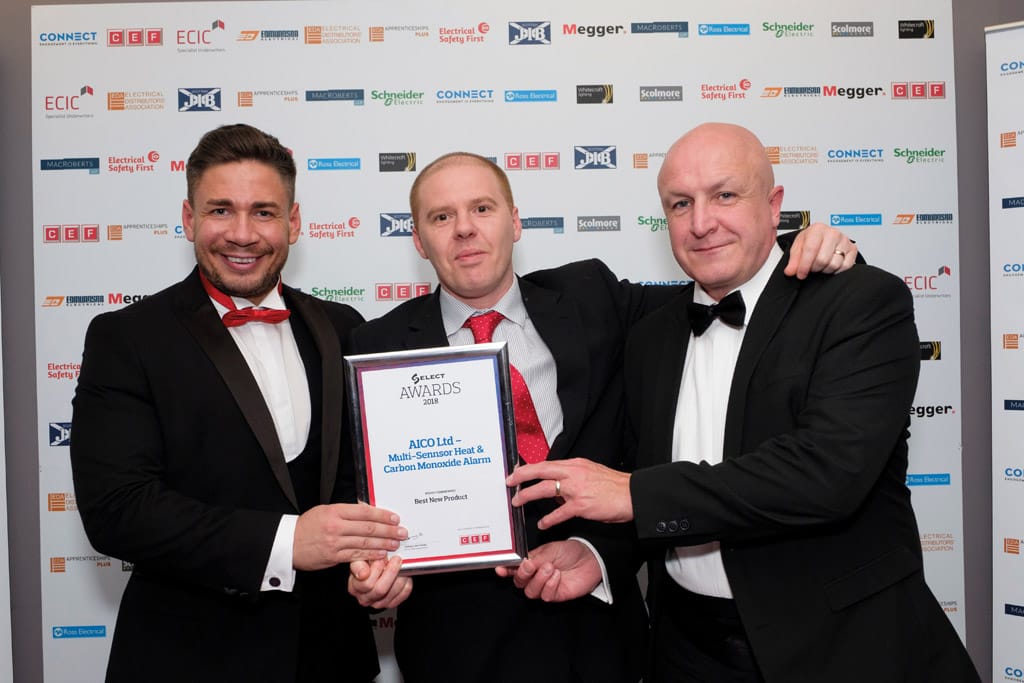 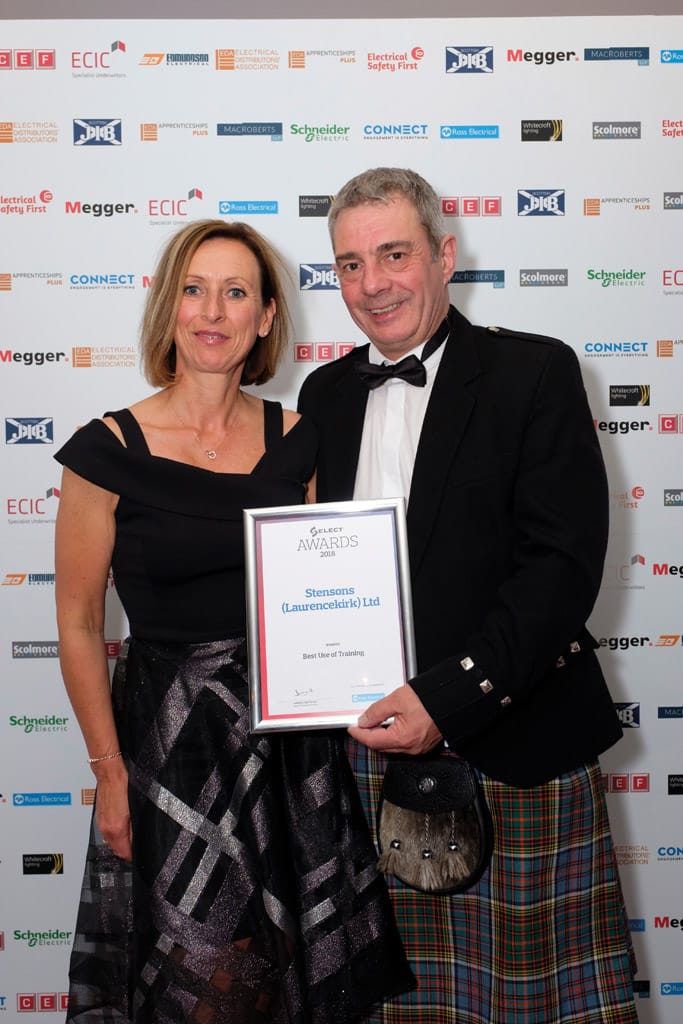 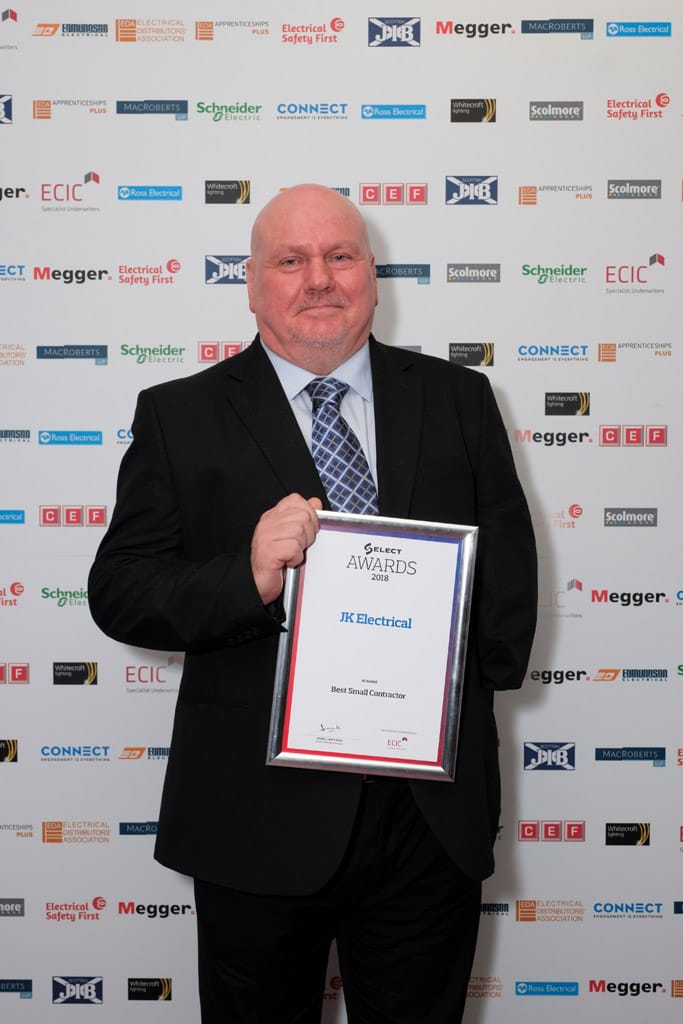 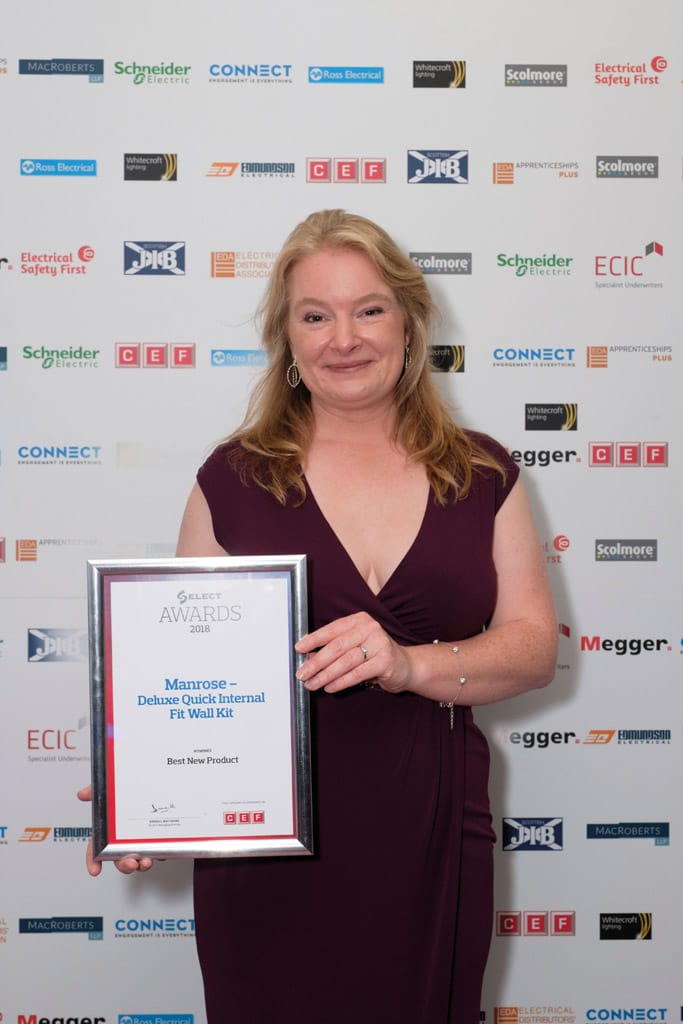 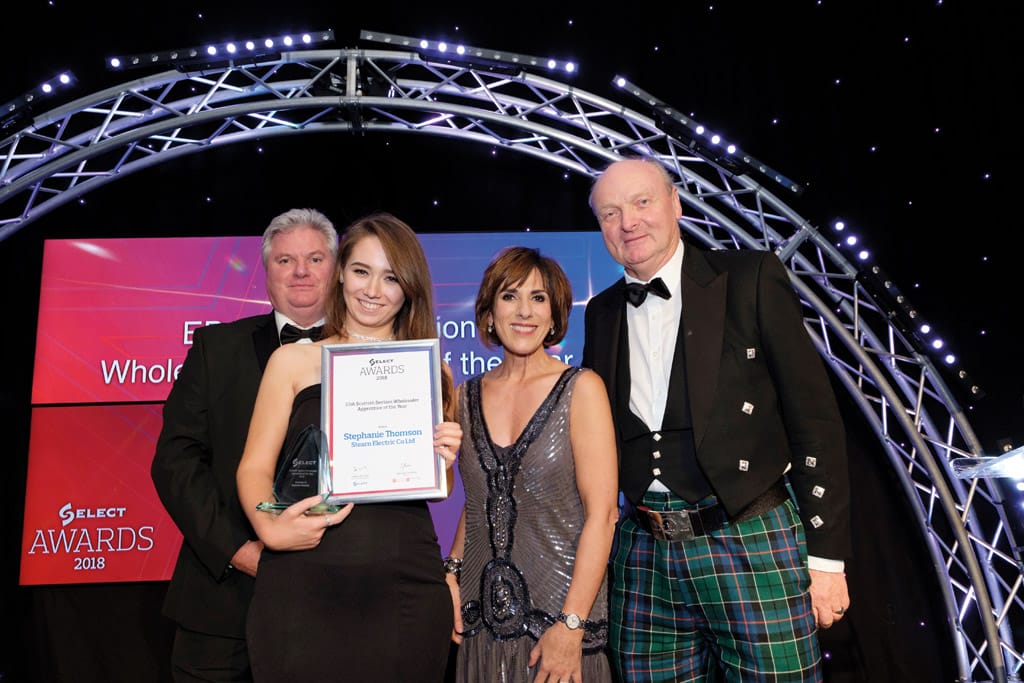 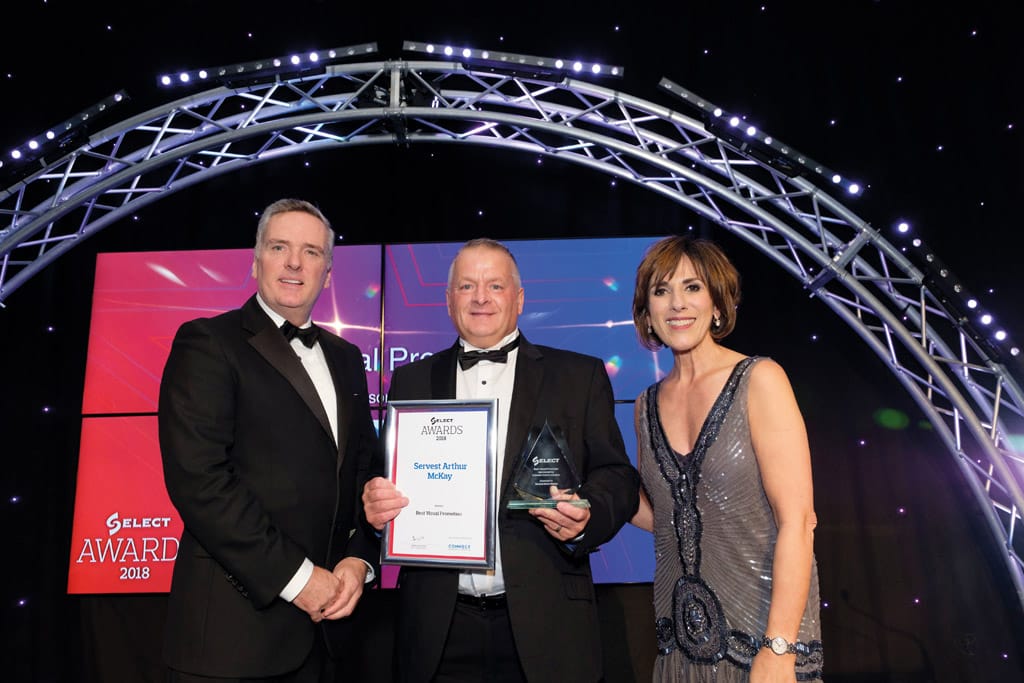 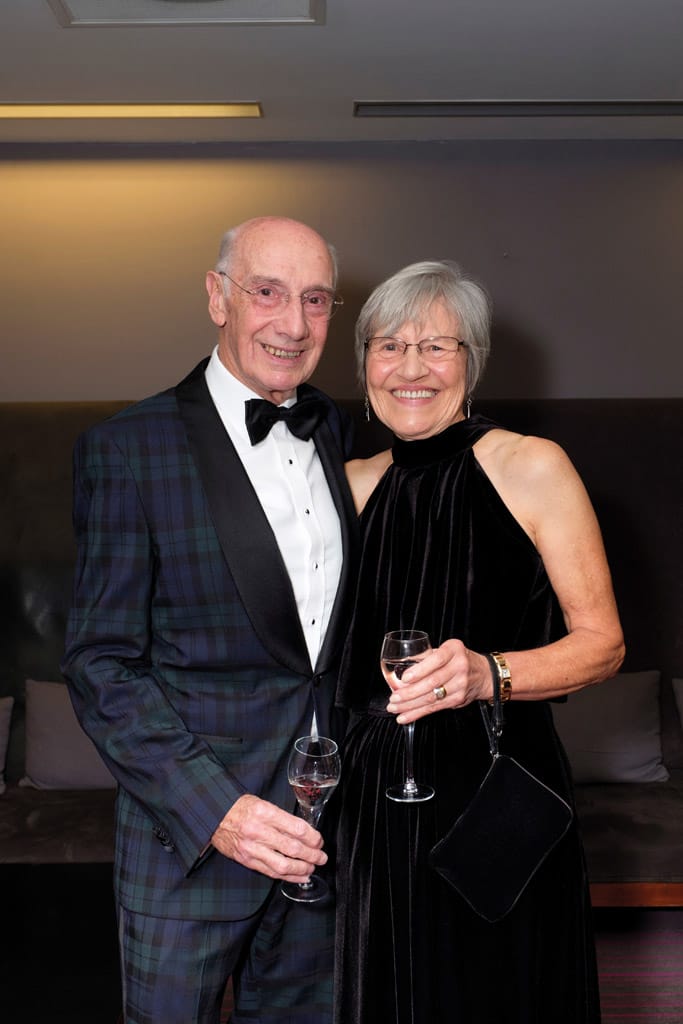