New firm does the double at SELECT Awards 2017

Jubilant Servest Arthur McKay Ltd was left seeing double after triumphing in two categories at the SELECT Industry Awards 2017. The cross-border firm – established only a year ago – was crowned Electrical Contractor of the Year at our 12th annual ceremony and also scooped Best Use of Training.

It was a night of triumph for the new company, formed in October when Suffolk-based facilities management service provider Servest acquired building services contractor Arthur McKay, whose HQ is in Edinburgh.

Proudly clutching the firm’s awards, Operations Director Mike Stark said: “I’m surprised and ecstatic in equal measure and am delighted on behalf of all our hard-working teams.

“These awards are a credit to our whole business and show that we’re moving ahead in the right direction. The only thing is, we’ll need to put up a new trophy shelf now!”

“Servest Arthur Mackay Ltd is a very worthy winner of our main award and its success in the training award also shows that it is committed to the continuing professional development of all its staff.”

The company was presented with its Contractor of the Year award by Simon Wood, from award sponsor Megger, while the training gong was handed over by Billy Richmond of Ross Electrical.

AKD Systems of Edinburgh and Richard Irvin Energy Solutions were also nominated for Best Use of Training.

The awards were among 10 handed over in front of 350 Members and guests at Glasgow’s Radisson Blu Hotel on Friday 13 October. Hosted by leading journalist Keith Aitken, entrants ranged from family firms to multinationals employing tens of thousands of people.

Outgoing MD Newell McGuiness – who received his own surprise award – added: “Each year, it is a much-anticipated pleasure to recognise the dedication, commitment and investment in the future which companies bring to this competition. They have gone the extra mile to demonstrate that the electrical sector in Scotland is in good hands.” 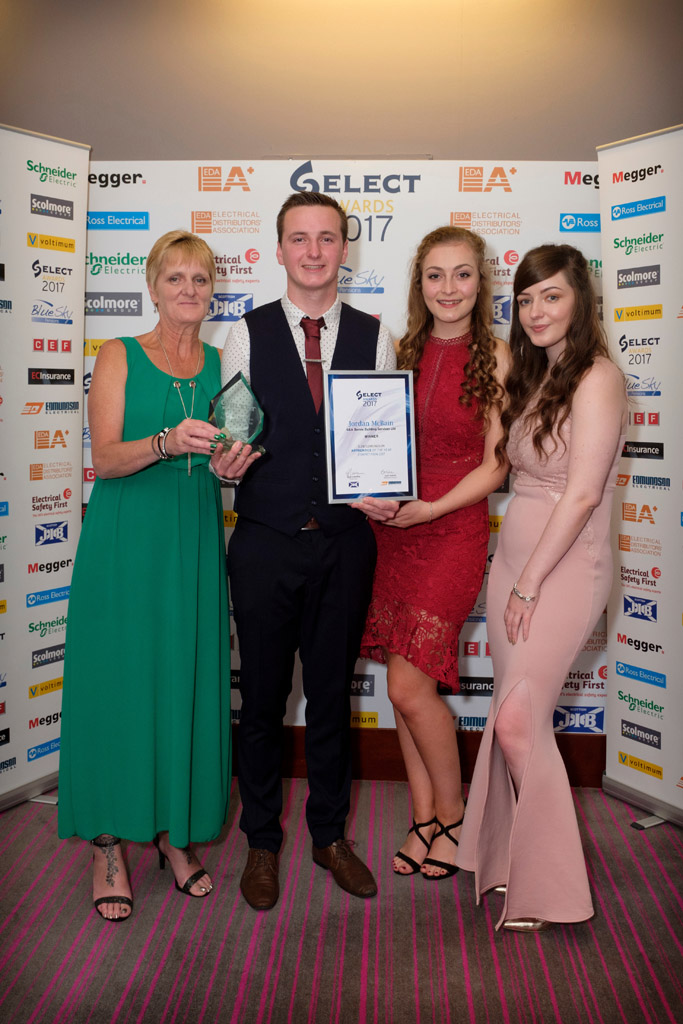 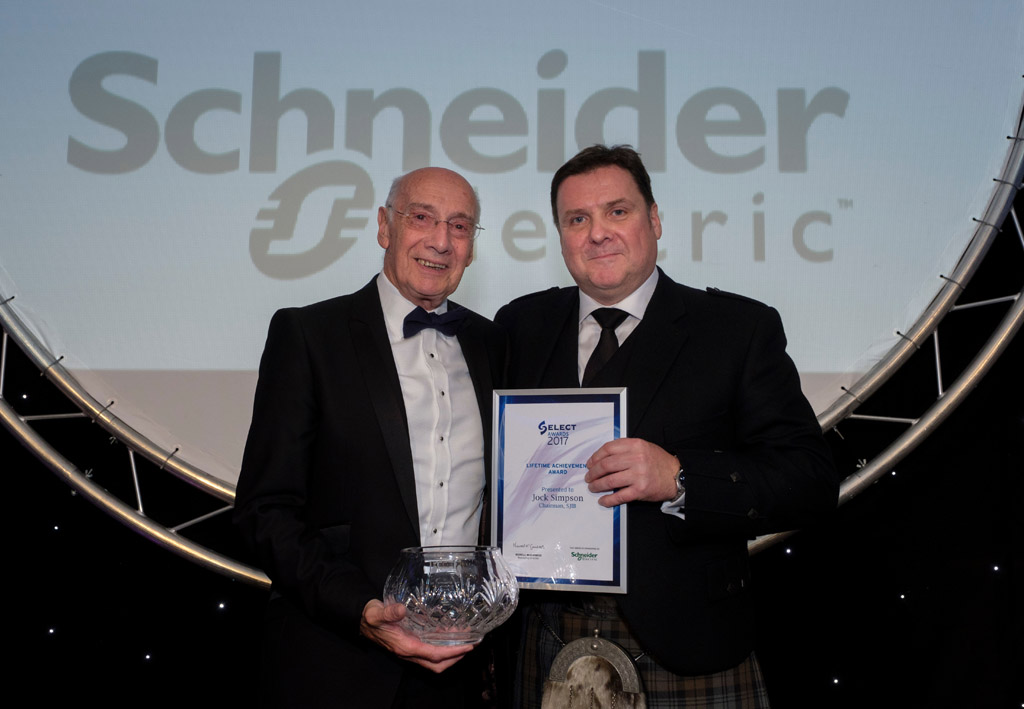 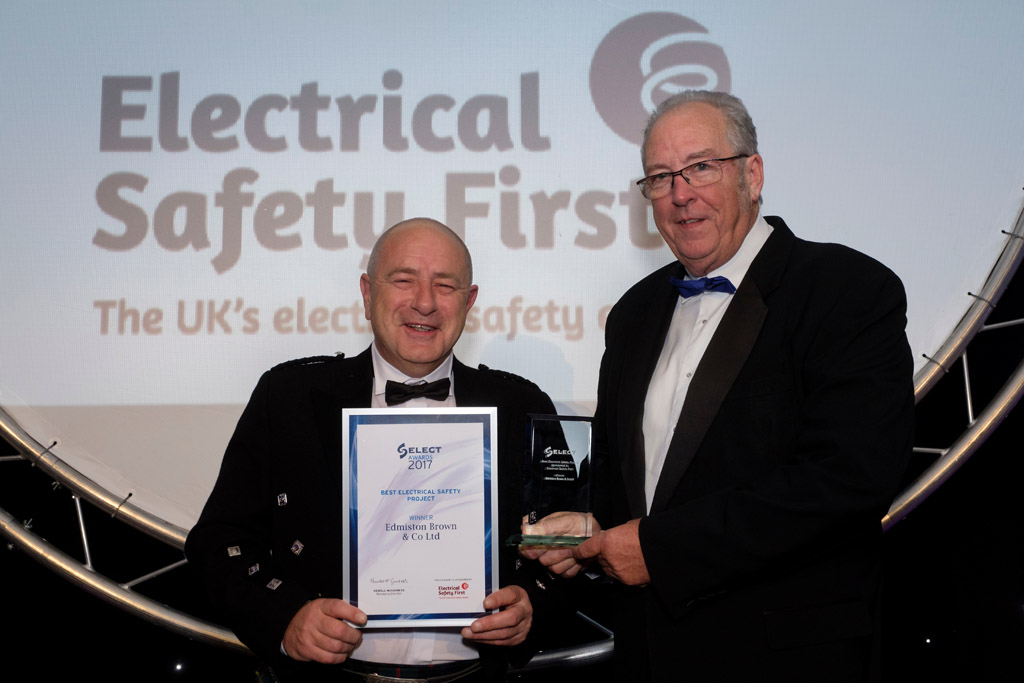 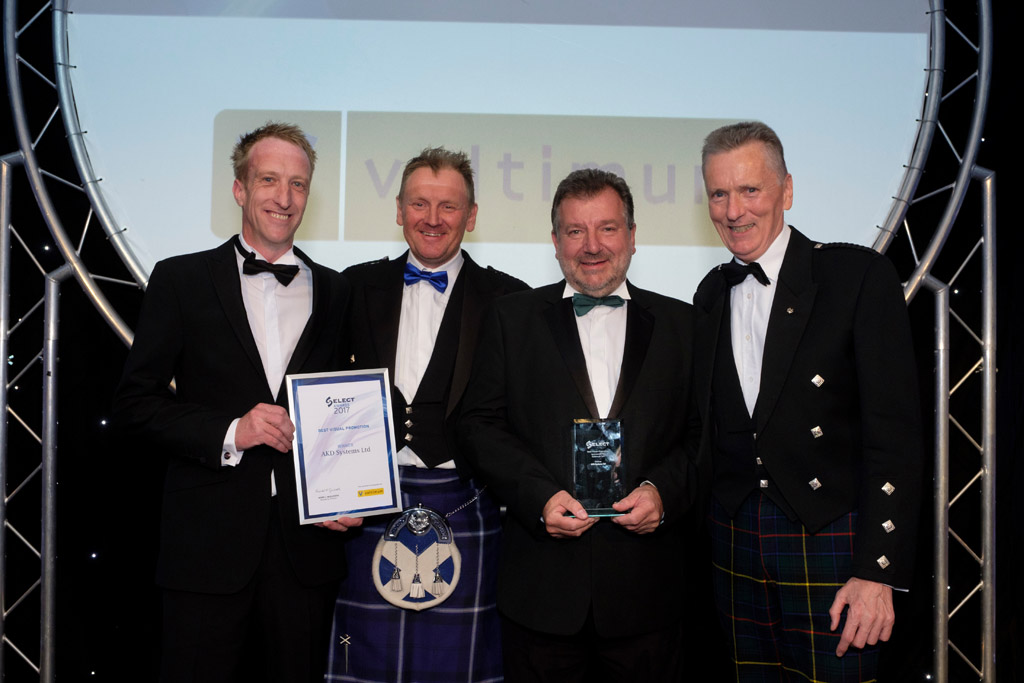 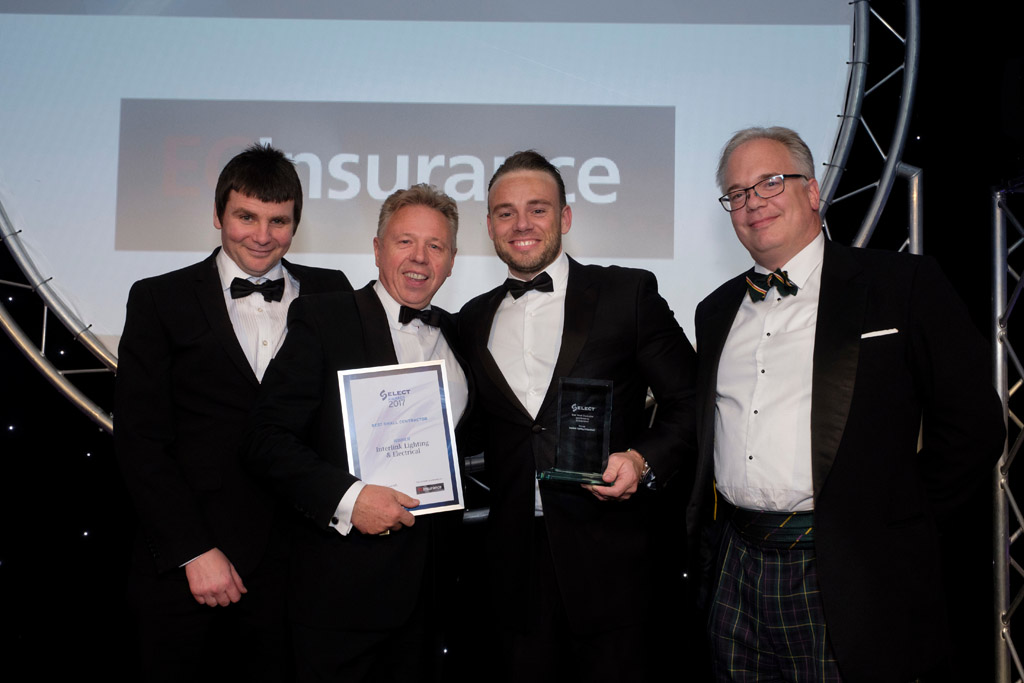 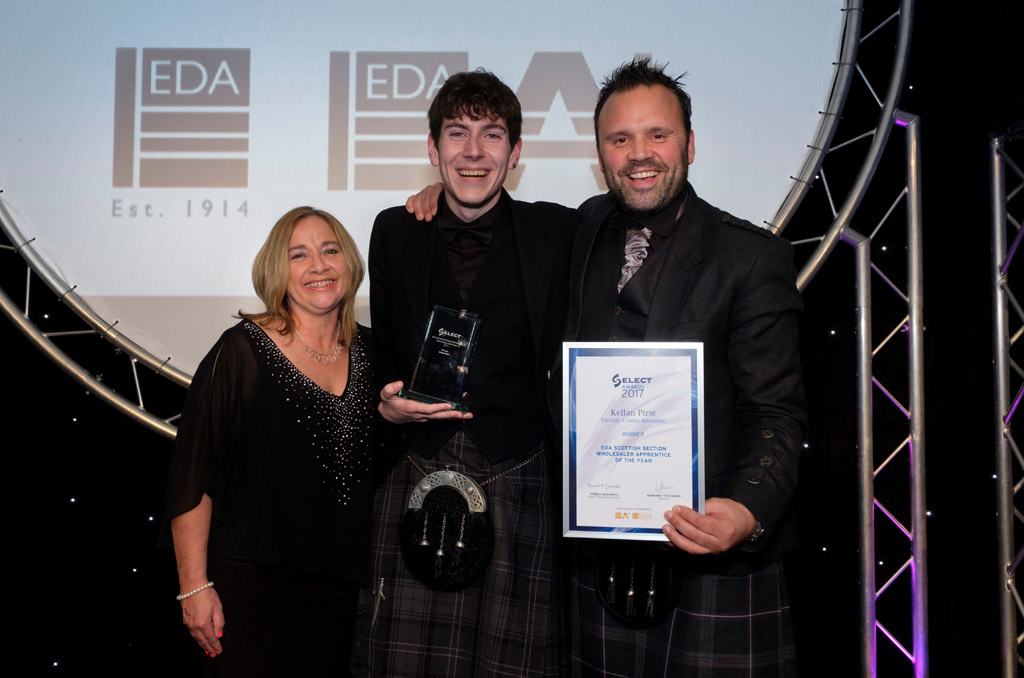 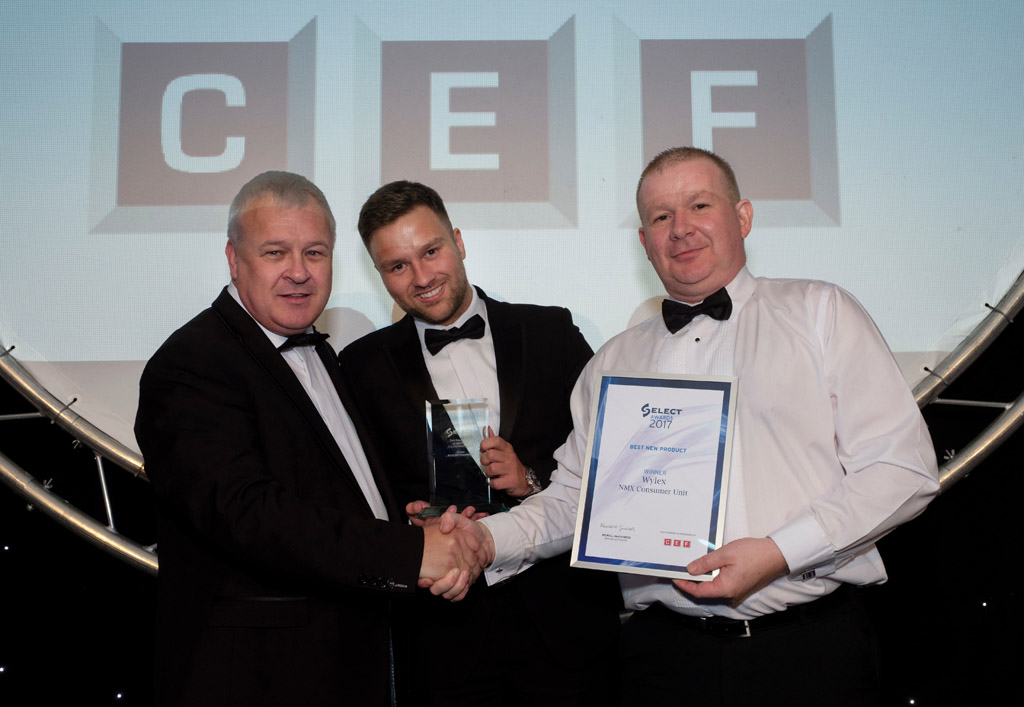 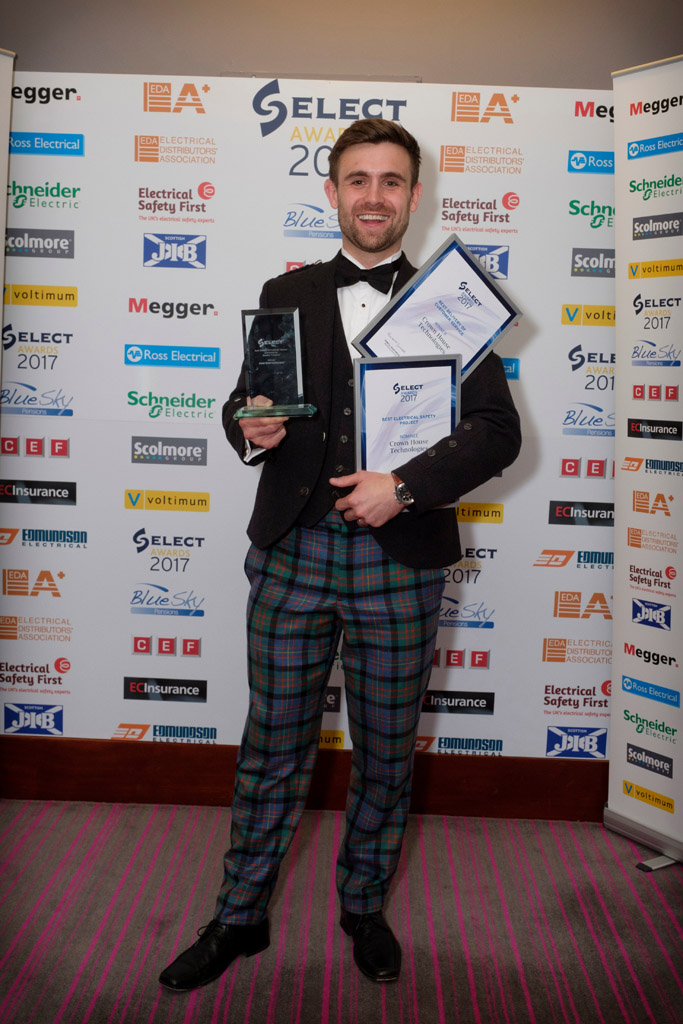 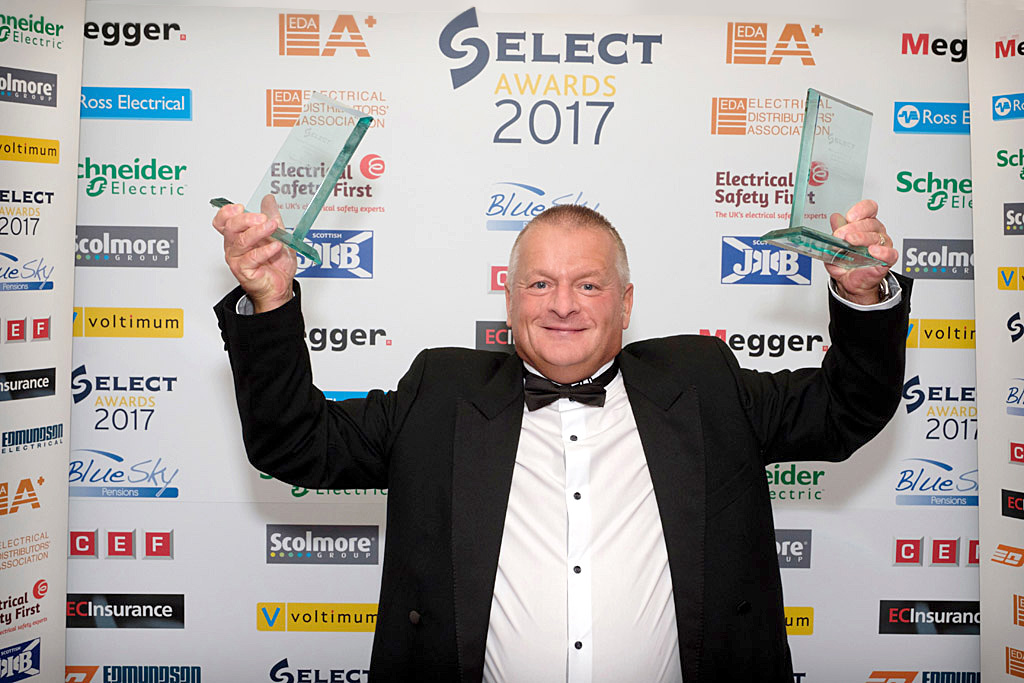 Glasgow’s Interlink Lighting & Electrical was rewarded for taking its business in a bold new direction as it scooped the small contractor award.

The firm, which has been shortlisted three times before, was recognised for streamlining its procedures.

Newell McGuiness said: “Two years ago, the firm introduced a five-year plan to restructure the company and transform internal weaknesses into strengths. This has led to record profitability and increased staff morale.”

The award was handed over by Mark Hodson, of sponsors EC Insurance. Other nominees were ATD Electrical Services, of Kirkcowan, EAL Electrical, of Grantown-on-Spey, and Kenneth Ferguson Electrical Contractors, of Connel, near Oban, which was highly commended.

Wholesaler Apprentice of the Year

Kellan Pirie danced his way to the stage after winning this new award, sponsored by Electrical Distributors’ Association Apprenticeships Plus.

Kellan, who works at Electric Center Inverurie, said: “It’s a great honour to be the first-ever recipient of this award.”

The new category reflects the vital contribution made by wholesalers and distributors and the importance of apprenticeships in attracting new talent.

The award was presented by Kristian Van Rensburg, Chair of the EDA Scottish Section, and Angela Devine of EDA Apprenticeships Plus. Also nominated were Craig Arundel, of Scott Coppola Electrical in Edinburgh, Colin McCormack of Stearn, Glasgow, and Nicole Bell, of Rexel, Kirkcaldy.

Huge cheers erupted as Wylex won for its NMX metal consumer unit, which leads the market thanks to its robust design.

Newell McGuiness said: “This product was chosen as it was apparent that a great deal of thought had gone into its design and manufacture. This not only helps to make the installation a lot easier but also improves safety by reducing the likelihood of loose connections.”

Motherwell-based Crown House Technologies continued its winning streak as it scooped this award.

The off-site manufacturer, part of building and infrastructure technology providers Laing O’Rourke, followed up its hat-trick of prizes in 2011, 2013 and 2015.

The award was presented to Project Manager and Electrical Engineer Cameron Thomson by Jessica Rigby from sponsor Blue Sky Pensions.

Alan Wilson, Head of Membership and Communications at SELECT, said: “Crown House commits to quality outcomes and continually learns and improves what it does.”

Also nominated were AKD Systems and Ideal Electrical Solutions (UK), both of Edinburgh, and Kenneth Ferguson Electrical, of Connel, Oban.

Edinburgh-based AKD Systems saw its name up in lights thanks to its striking logo and fleet livery, featuring brightly coloured cables and symbols.

Demi Armstrong, SELECT’s Events, Marketing & Website Coordinator said: “AKD’s colour-coded message is a lesson in letting the customer know who you are and what you can do for them.”

Glasgow’s Edmiston Brown was rewarded for its exemplary safety record as it received this award.

The firm has had no major reportable accidents in five years and was praised by judges for its Falkirk canal tunnel work. Newell McGuiness said: “This very challenging job was done to the highest possible standards.”

The award was presented by Bryn Walker from Electrical Safety First, with Crown House Technologies and Select Electrical and Mechanical Services also nominated.

Industry legend Jock Simpson received a standing ovation as he was handed his Lifetime Achievement Award. The honour recognised his long and distinguished career, during which his expertise and wisdom have benefited countless people.

After he was given his award by Neil MacEachern of sponsors Schneider Electric, Jock said: “This is a tremendous shock – to be honest, I am a bit embarrassed. But it is also a tremendous honour and I am delighted to accept it from such wonderful friends and colleagues.”

Newell McGuiness added: “Jock has worked tirelessly throughout his career to enhance employee-employer relations and has had to exercise the judgement of Solomon in often very testing situations.

“His skills have often been instrumental in keeping competing parties together, agreeing on difficult issues and seeking compromises. He has taken on heavy responsibilities, reached the top in a variety of different areas and has always acted in the best interests of everyone in the industry, from shop floor to boardroom.”

Jock is Executive Chairman of the National Joint Council (NJC) for the Engineering Construction Industry, and Chairman of the Scottish Joint Industry Board. He also has extensive experience in the energy industry, including senior roles with British Energy and npower.

Fiona Harper, Head of Employment Affairs at SELECT and the Secretary of the SJIB, said: “Jock has made a huge contribution to the health of the industry. He has brought a keen mind and patience to difficult situations and shown that resolution is always more beneficial than conflict.”

Apprentice of the Year

Although the identity of the Apprentice of the Year was top secret until the big night, the winner was always going to be called Jordan. Each of the finalists shared the same first name – but it was 21-year-old Jordan McBain who pipped his namesakes Jordan Gilchrist and Jordan Scott to the prize.

Jordan, who works with Highland company G&A Barnie Building Services, said: “This has been a terrific night for Team Jordan! I didn’t expect to make the last 16, never mind win, so it was a big shock when my name was read out– my girlfriend, mum and sister just screamed. It’s been a fantastic occasion and I’ll certainly be celebrating tonight.”

A spokesman for G&A Barnie said: “We are very proud of both Jordans and particularly pleased for Jordan McBain. Both are hard-working, dedicated to the trade and a credit to the company.”

The award – sponsored by the Scottish Joint Industry Board (SJIB) and Edmundson Electrical – recognises the hard work that apprentices put in to becoming a fully-qualified electrician. It was presented by Jock Simpson of the SJIB and Gary Mason of Edmundson.

Fiona Harper, the Secretary of the SJIB, said: “In many ways, this award is the most significant as it represents the future of the industry. It is encouraging to know our future is in good hands.”

Jordan will now be treated to a visit to Schneider Electric’s plants in Grenoble, where he’ll be given an insight into their Research and Development centre.